On my page on “Examples of Critical Reading,” I write that critical reading “means asking
what we can learn from the way the author selected and arranged facts the way she
did.” The same is true of images, only we look for the selection and arrangement of visual elements, rather than facts.

Here are three examples of critical readings of images. Note how in each case the critic asks what choices the creator made about what to show and what to omit.

Analysis of Edward Savage, “George Washington holding a plan for the capital city,” 1793 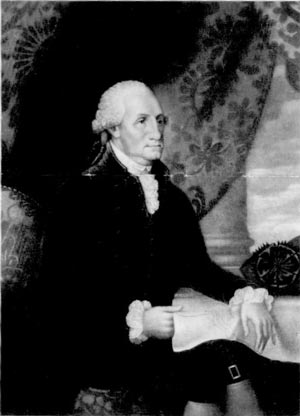 Portrait of Washington by Edward Savage

“A portrait of George Washington with the plan for the Federal City, engraved in 1793 by Edward Savage, shows how the delineation of a new and grand city lent credence to the image of Washington as ”King George” while celebrating the originality of Washington”s vision and its power to bend nature to his political design. The plan is presented as Washington”s brainchild . . . he calmly gazes into the magnificent future prescribed by his design and echoed by the open sky in the background. While Jefferson gazes in adoration upon the classical past, Washington is equally transfixed by the future—he appears even to be looking at his city, already built. It is there, he can see it, and we are invited to see it too. This confident expectancy is further suggested by the way Washington supplements the classical past, as represented by the column. He turns his back to it and yet subsumes it by the uprightness of his posture; he becomes a pillar himself of the future state. Contrary to Jefferson”s dark view, this portrait suggests that it is no crime to have ”the vision thing.”

“The inevitable success of this vision is suggested by the rest of the engraving, which points to the power of the mind to turn nature into art: flowers are transformed into the floral motif on the chair, drapery, lace cuff, hair ribbon, and bow resting upon the plan; they are echoed even in the petal-like quality of Washington”s hair. The flowerlike bow, hovering over the plan, hints at how nature inspired the radiating intersections of avenues. The engraving further imposes Washington”s very person upon the land itself: the Eastern Branch follows the course of his knee, his fingers are compared to the avenues, his pants buckle serve as a template for the city blocks—the very paper of the plan, then, becomes a landscape that bends in Washington”s hand.” 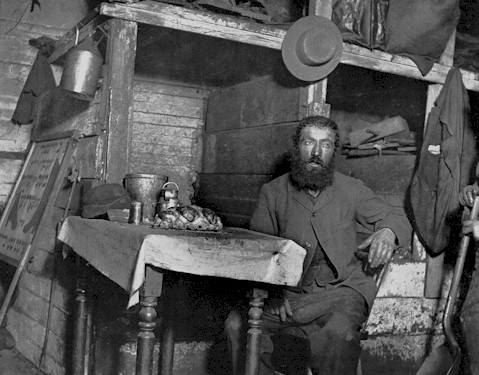 “Photographs such as ”Hebrew Master Ready for Sabbath Eve in a Coal Cellar” manipulate the inherent democracy of the lens and the flash illumination; the eye is forced to pick its way from object to object, to choose between a challah loaf and a shovel, a dirty coat and a sign in Hebrew. Because Riis seems not to call attention to any one particular element in the photograph, he gives the impression of total disengagement and absolute objectivity.

“Riis often used his framing to accentuate this quality. In this photograph, the seemingly arbitrary placement of the right-hand edge (cutting off one figure and leaving only a pair of disjointed hands holding a shovel) combines with the overall tilt of the frame to give an unsettled look to the picture. In fact, this picture is so carefully composed and utterly purposeful that it demands that ill-formed appearance. That shovel must be in the picture, for it signals the inappropriateness of the coal cellar as a dwelling. We are, apparently, watching a devout Jew interrupted from his devotions by the rude work around him. To include more than the hands of the shoveler, however, might detract from the presence of that lone human figure; it would also decrease the symbolic force of that shovel. The loaf of bread, close to the center of the frame and carefully separate from the other details of this man”s meal, serves graphically to emphasize the religious nature of this moment.”

Source: Roland Marchand, Advertising the American Dream: Making Way for Modernity, 1920-1940(Berkeley;
Los Angeles: University of California Press, 1985), 260; image of Peerless Motor Car Co. Ad, c. 1927, from The History Project at UC Davis, Roland Marchand Collection, http://historyproject.ucdavis.edu/ic/image_details.php?id=437(23 May 2010) Though this particular image does not appear opposite the quoted text from Marchand”s book, it is similar to the images that do. 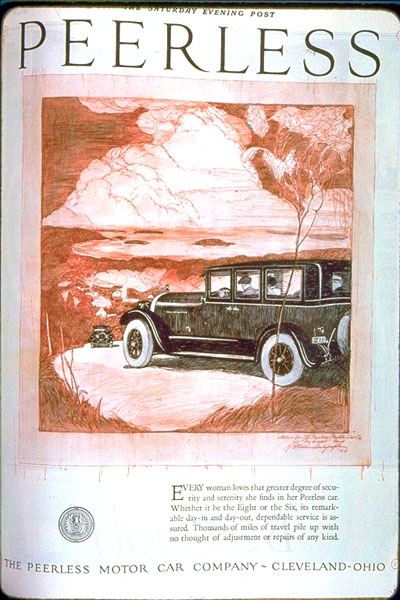 “The economic transformation of ”village America” hardly devitalized the American village as a visual cliché in advertising. Like a lingering ghost-image, the idealized American small town, with its connotations of unity, neighborliness and comfortable human scale, became a sight more familiar to Americans through the advertising pages than through their direct experience. . . .

“In most advertisements, the village appeared as part of the background rather than as the focus of attention. Often it was no more than a stylized miniature. Still, it helped evoke an atmosphere and contributed to a conventional perception of the American landscape. Certain stereotyped characteristic can be observed even in the most minute versions of this visual cliché. Almost invariably, the idealized village contained a single spire that towered above the other buildings . . . The houses of the town were grouped closely together, with the steeple or spire roughly in the center. Almost never did another prominent building appear–except in close-up illustrations of the main street with its bank, general store, and perhaps a gas station and movie theater. Grain elevators, mills, and other evidences of processing or production for export were virtually non-existent. If a highway entered the town, it usually followed a gently winding course.

“These tableaux did not present idealized American villages as nostalgic images of the past. Although often stylized in appearance, these villages purported to represent part of the current landscape that consumers would experience while using the batteries, motor oils, tires, auto accessories, soaps, telephones, and other products featured in the ads. As they viewed repeated images of these pristine eternal villages, readers could find assurance that, despite the advance of awesome and impersonal skyscraper cities, their society still retained the qualities suggested by ”village America.””

For more examples of image analysis by historians, see the sections on maps, photographs, advertisements, and cartoons at “Making Sense of Evidence,” History Matters: The U.S. Survey Course on the Web, http://historymatters.gmu.edu/browse/makesense/

For much more instruction on historical research, read The Princeton Guide to Historical Research, available in April 2021.

This site is maintained by Zachary M. Schrag, Professor of History at George Mason University. While its advice is designed primarily for undergraduate and graduate students of United States history, I hope it will prove useful to all those who wish to study history and related disciplines. This material was formerly posted at www.schrag.info and was moved to this domain in the summer of 2010. The views expressed here are my own and may not reflect those of George Mason University.

Please use this site for the most recent versions. Except where noted otherwise, all original material on this site is copyright © 2002-2012 Zachary M. Schrag. It may be used for non-commercial personal and educational purposes provided it is attributed to Zachary M. Schrag.

If you are an educator who finds this site useful for classroom teaching, I would appreciate your sending me a note at zach (at) zacharyschrag.com telling me how you are using it and how it might be improved. Please do not use this address for the public business of George Mason University.