Inspired by a Twitter exchange, I realized that I have not updated my list of history audiobooks since July 2019. Here are 43 I’ve listened to since then, mostly on Audible.com, some from Scribd or Chirp. It’s especially nice to see more university presses joining the club. Special thanks to Rebecca Tushnet for entering most of these in our LibraryThing account.

END_OF_DOCUMENT_TOKEN_TO_BE_REPLACED

In 2013, I first posted a list of some of my favorite history-related audiobooks. I have posted an updated list of 106 books, all available on Audible.com.

This morning’s Washington Post devotes an entire page to a marked-up transcript of a recorded conversation featuring Bob Woodward, President Trump, and Kellyanne Conway. Reporter Aaron Blake models critical reading: noting key passages and comparing them both to each other and other information he knows. 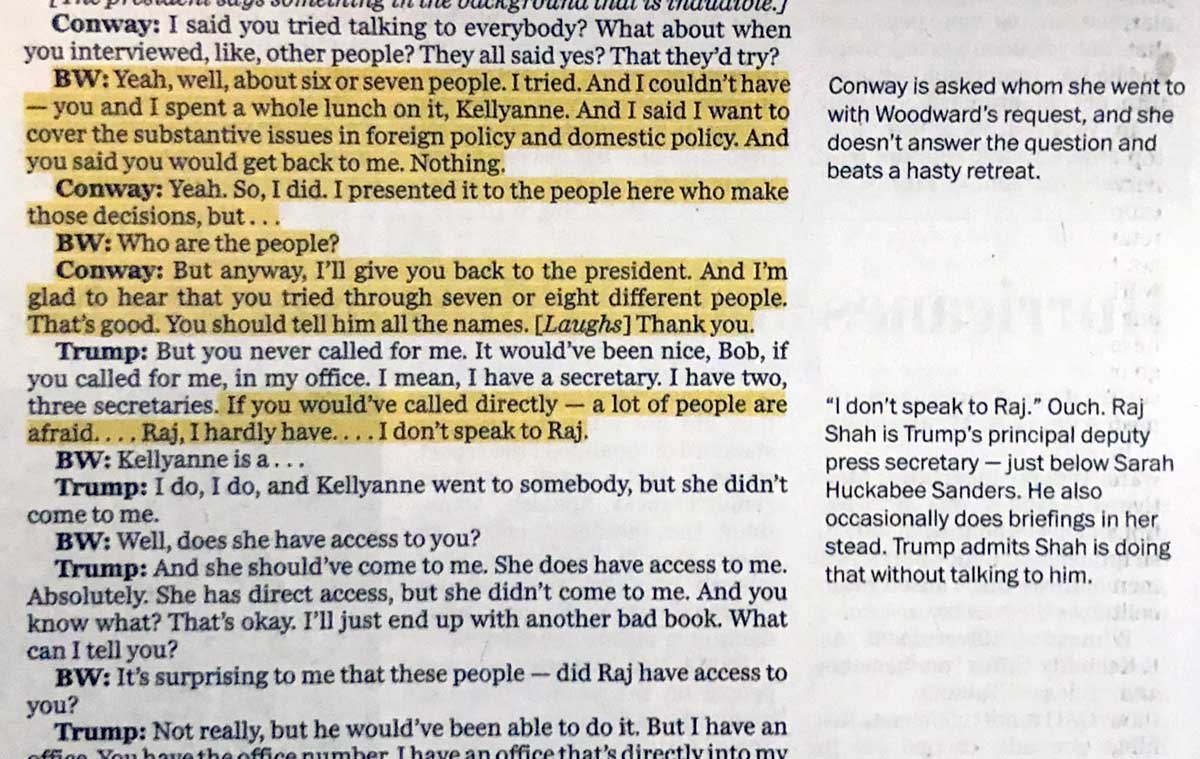 In a particularly good section, Blake examines both internal tensions (Conway’s refusal to answer who denied Woodward’s request for an interview with Trump) and external tensions (Raj Shah’s position as principal deputy press secretary vs. Trump’s statement that “I don’t speak to Raj.”).

Note how Blake chooses a verb that signals the significance of Trump’s statement: “Trump admits Shah is doing that without talking to him.”

Also note how earlier in the transcript, Conway shifts to the passive voice to obscure responsibility: “I put in the request. But you know, they — it was rejected.” Woodward asks, “Who are the people?” in a failed effort to pierce the fog.

Meanwhile, on Twitter, Bill Hayes has posted several photographs of books annotated by the late Oliver Sacks. Sacks not only flagged key passages; he also recorded his own reactions, turning his reading into an active conversation with the author.

See also, How to write in your books.

Hanover College, History Department. On Marginalia: Note Taking for College Students and Others Who Want to Make the Most of Their Reading Time

Making marginalia (notes or symbols written in the margins of a document) is the best way to get the most out of the time you spend reading a difficult text.

Historian Kevin Kruse explains how his sources surprised him and forced him to set his story earlier than he had planned:
END_OF_DOCUMENT_TOKEN_TO_BE_REPLACED

Professor Caleb McDaniel of Rice University offers some excellent advice on developing gut reactions to a text into comments that will inform your own thinking and that of your classmates.

How to Discuss a Book for History | W. Caleb McDaniel.

I recently finished listening to the unabridged audiobook version of The Second Red Scare and the Unmaking of the New Deal Left by Landon R. Y. Storrs. Not only was the book informative and persuasive, but it may herald a new kind of audiobook offering.
END_OF_DOCUMENT_TOKEN_TO_BE_REPLACED

Back in October, William Cronon fretted that today’s readers, especially younger readers, may lack the attention span to read book-length accounts of the past, whether they are printed on paper or displayed on a screen.
END_OF_DOCUMENT_TOKEN_TO_BE_REPLACED

Unlike economic historians, most historians have, until relatively recently, been reluctant to engage in counterfactuals on the seemingly incontrovertible grounds that what did not happen is not history. But I have come to think that the opposite is, in fact, true: we need to think about what did not happen in order to think historically. Considering only what happened is ahistorical, because the past once contained larger possibilities, and part of the historian’s job is to make those possibilities visible; otherwise all that is left for historians to do is to explain the inevitability of the present. The inevitability of the present violates the contingency of the past, which involves alternative choices and outcomes that could have produced alternative presents. To deny the contingency of the past deprives us of alternative futures, said for the present is the future’s past. Contingency, in turn, demands hypotheticals about what might have happened. They are fictions, but necessary fictions. So it is only by conceiving of alternative worlds that people in the past themselves imagined that we can begin to think historically, to escape the inevitability of the present, and get another perspective on issues that concern us still.

Ironically, Railroaded (though a very fine book in other respects) does not do a particularly good job fleshing out its counterfactuals, particularly the bit about “alternative worlds that people in the past themselves imagined.” Did Gilded Age Americans seriously consider trying to settle the West without any transcontinental railroads? Or with just one? Or with several under public ownership? Or without any public capital? White hints at all of these possibilities, but he does not explain whether there was a significant consituency behind any, or what the country would have looked like had they been pursued.

I do agree with White that we need to explore counterfactuals to understand what was at stake in any given debate. D. W. Meinig’s maps of a Greater and Lesser United States, for example, help me appreciate the gravity of the debates of the mid-19th century.

For much more instruction on historical research, read The Princeton Guide to Historical Research, available in April 2021.

This site is maintained by Zachary M. Schrag, Professor of History at George Mason University. While its advice is designed primarily for undergraduate and graduate students of United States history, I hope it will prove useful to all those who wish to study history and related disciplines. This material was formerly posted at www.schrag.info and was moved to this domain in the summer of 2010. The views expressed here are my own and may not reflect those of George Mason University.

Please use this site for the most recent versions. Except where noted otherwise, all original material on this site is copyright © 2002-2012 Zachary M. Schrag. It may be used for non-commercial personal and educational purposes provided it is attributed to Zachary M. Schrag.

If you are an educator who finds this site useful for classroom teaching, I would appreciate your sending me a note at zach (at) zacharyschrag.com telling me how you are using it and how it might be improved. Please do not use this address for the public business of George Mason University.